Aleks dBoro was my final project for a MA Future Design degree at Teesside University in 2016 and was developed as an adaptable character that could serve as a vehicle for a broad array of tales within a larger saga, ranging from historical events to everyday happenings to fantastical science fiction while pointing a finger at the human creature’s curious behaviour. The 16 page sequential work produced was published on the 3rd of September 2016 in the 20th anniversary edition of the Icelandic comic magazine BLEK.
Physequential Storytelling explores ways of telling a pre-existing sequential story site-specifically adding to the experience, yet remaining true to the tale. It also serves as a way to enrich an exhibition environment by engulfing the viewer in the world of the story. Due to 'health and safety' limitations I had to pull back from my initial vision, but that also gave me the opportunity to mould my ideas to the space, with those restrains in mind. More on Physequential Storytelling in menu on the left.
This sequential paper includes my first published comic-work ...what ever it takes. It was printed in the 1st edition of the Icelandic comic magazine BLEK in 1996.  Following it is the prequel to the 1996 story, the 2016 MA project Whatever it takes! that dives further into the parallel time-line of Reykjavík city in the year 2014 while simultaneously introducing the character of Aleks dBoro for the very first time.
You can buy a copy of my final project for £8 (includes postage within the UK) at NewspaperClub (click here) 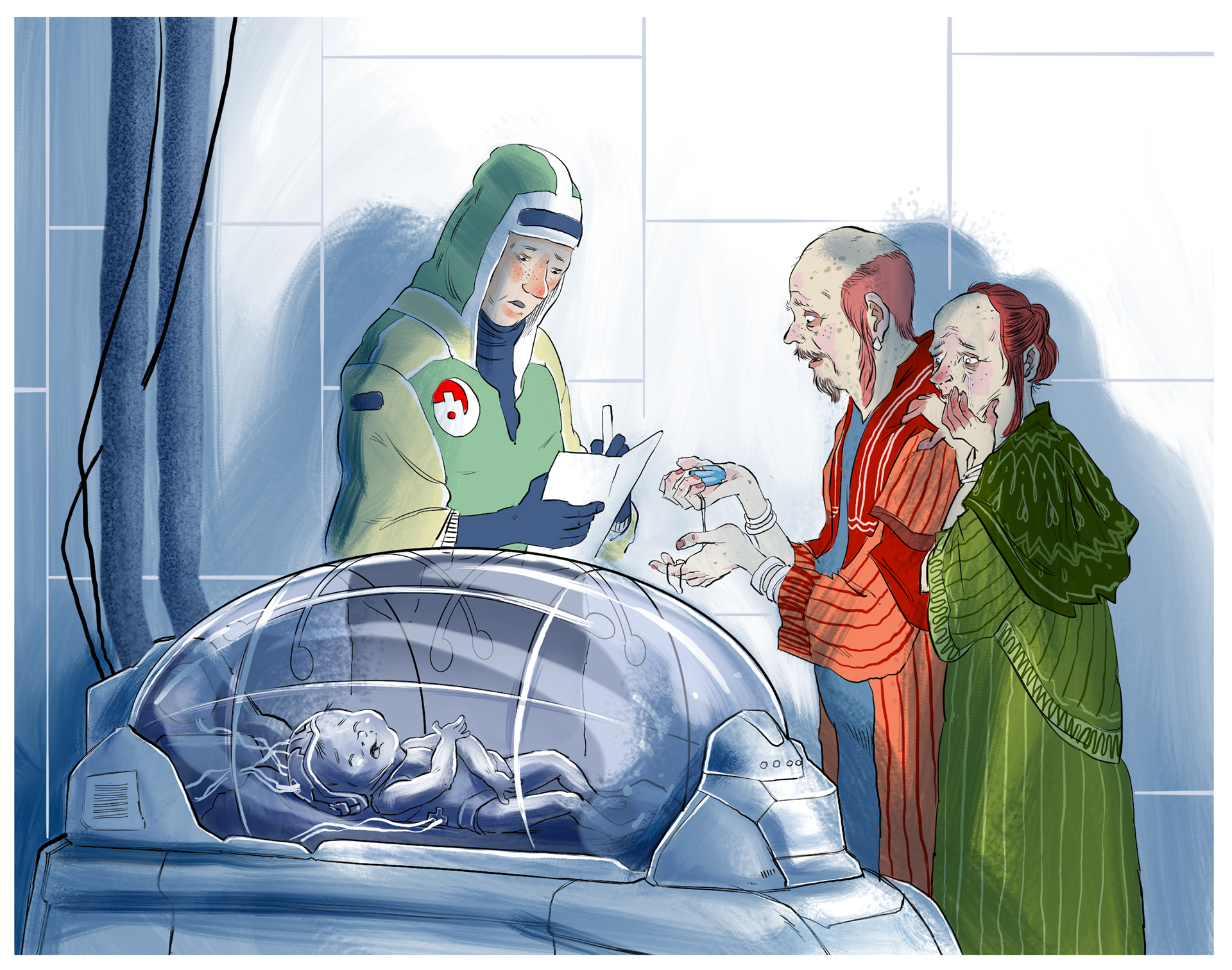 Aleks dBoro resides on the planet Mars. She is an Interdimensional Story Gatherer from the 32nd Century able to travel to any point in the Universe’s past and its parallel words, thanks to a mysterious crystal found by her father in the Asteroid Belt shortly before her birth. She is a severely handicapped mutant in a locked-in syndrome state under the care and supervision of the Priorities, the ruling elite of Mars. Aleks’s close proximity to the crystal from birth resulted in a close resonant-relationship enhanced by her superb mental abilities. This symbiotic relationship was discovered by chance by the Priority Scientist Frank dJones at the Priority Experimental Science Laboratories, located in the main Priority settlement in the Cydonia region of Mars, as he ran preliminary tests on the crystal’s structure, that eventually resulted in communication with infant Aleks. 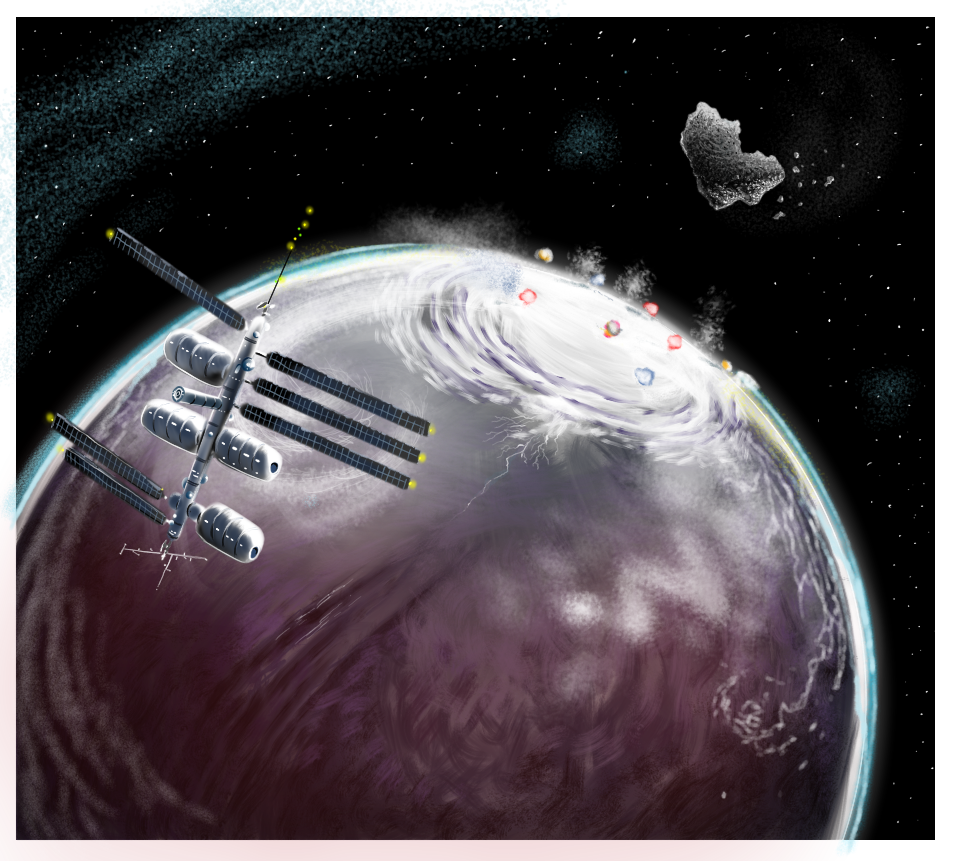 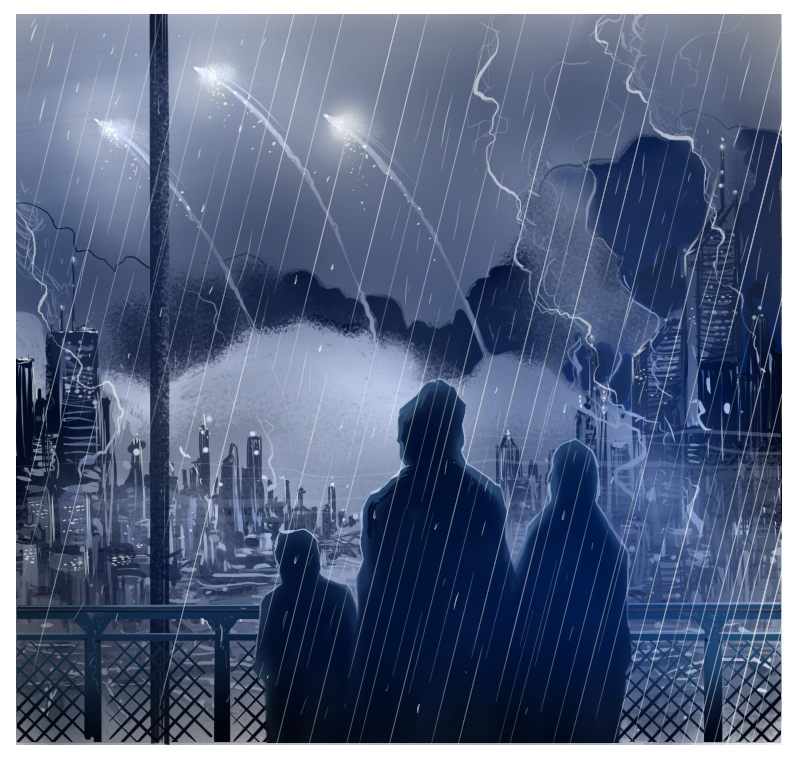 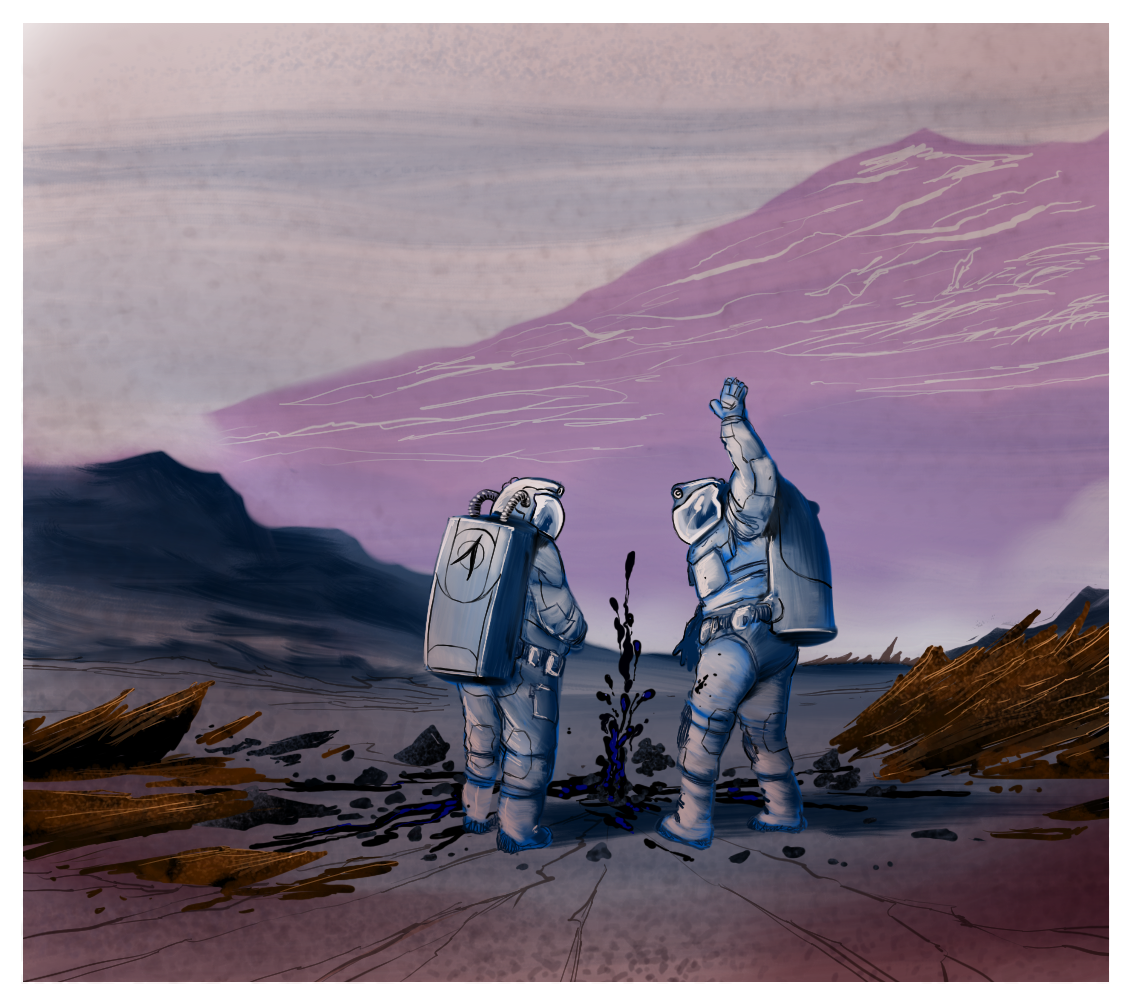 Due to the messy colonization history of Mars and the initial lack of information regarding their past, Martians gained thirst for tales and historical events. As part of their Priority religious practises, being able to see all sides of an event until you lose all aspect of right or wrong - bad or good, was of utmost importance. This practise would be instrumental in the way Aleks gathers her tales – going on numerous visits to the same moment to collect information from all sides and points of view.
It is in this environment that Aleks’s abilities come to light as she starts to report on her apparent random jumps in time. This the Priority elites turn into a profit making enterprise. 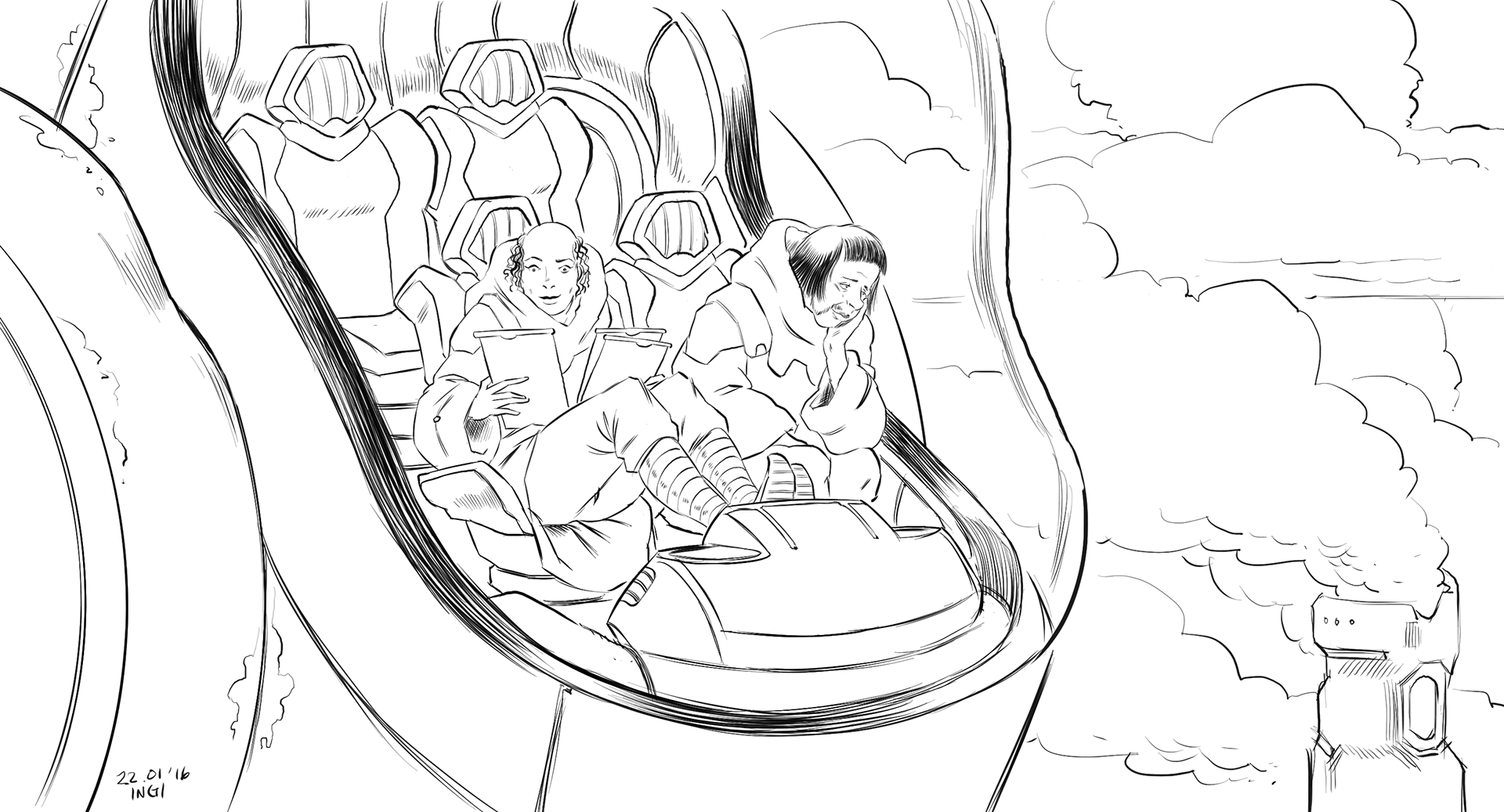 The main focus of the story happens around the time when Aleks is 21 years old when she has become somewhat disillusioned about the whole affair and is starting to bend the imposed rules set by her team of scientists - though dJones (who has become somewhat of a father figure to her) allows for her periodic breaches of protocol. 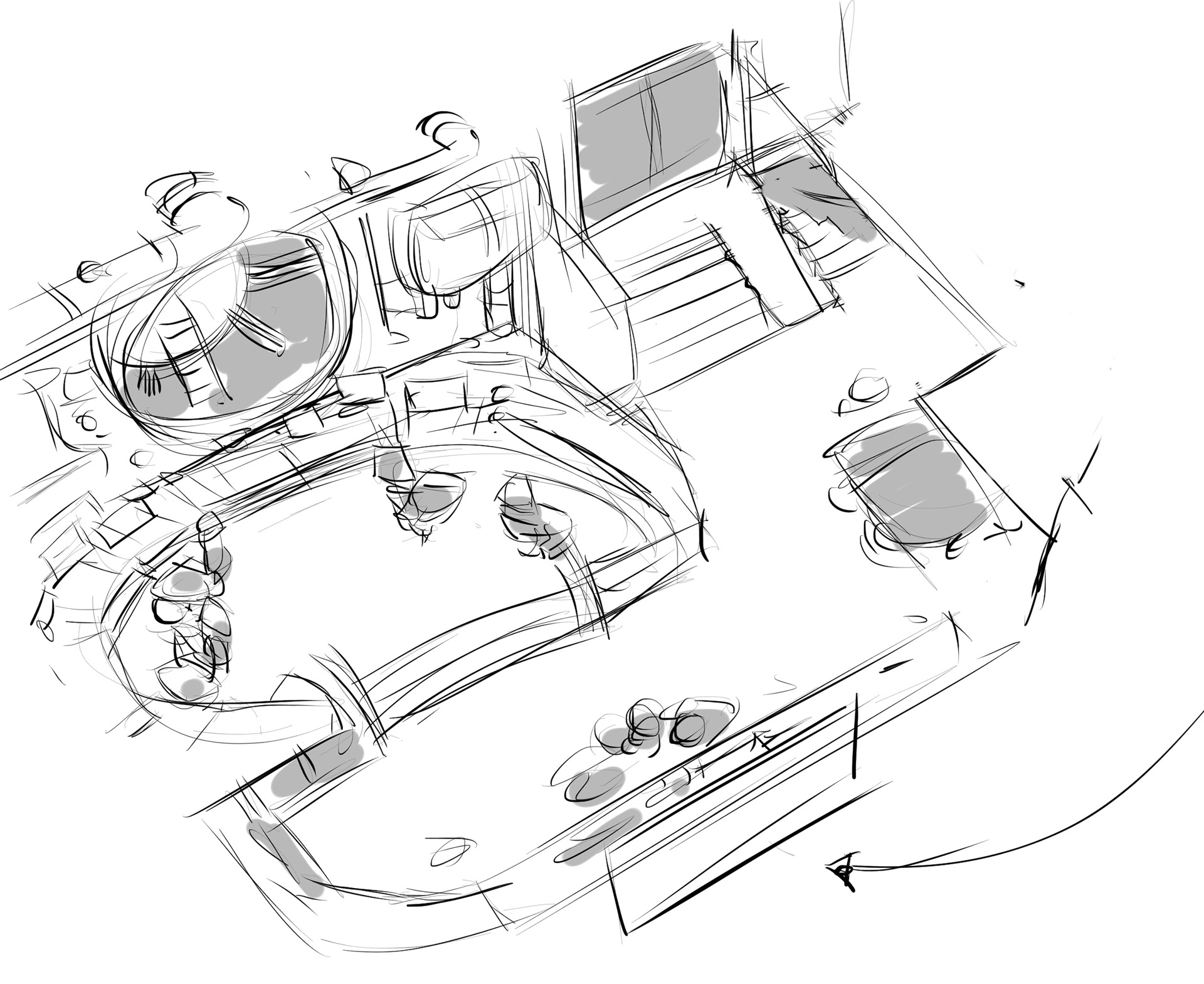 The way Aleks travels in time is by the gravitational forces that events create in space-time. The crystal allows for time being read as rings on a tree stump - by each crystal-layer resonating its own frequency, but it is the combination of Aleks’s mind and the crystal that create means of travel by using the gravitational pull events create in space-time. Over time the Priority scientists have been able to map Aleks’s travels and create a record of locations, yet most of her travels happen by fixing a rough location in time and allowing moments to drag her in. As the location is fixed, they then can move back and forward from that moment, by hours, days & years. Being able to stay within their own time-stream/reality is something they have not mastered at the time her story begins, thus events recorded by Aleks are often askew to their timeline.
Here below are few slides from my final MA Future Design presentation 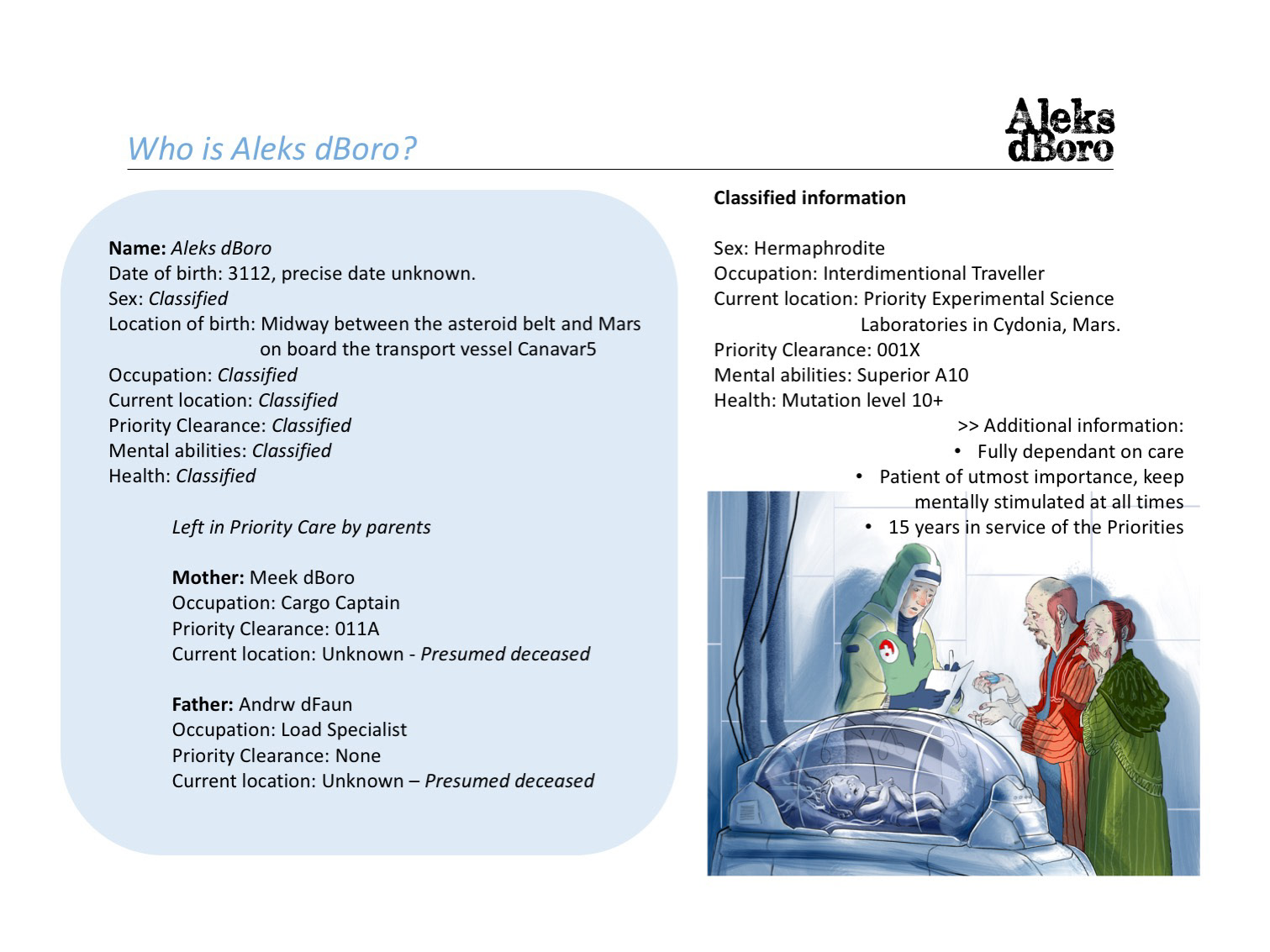 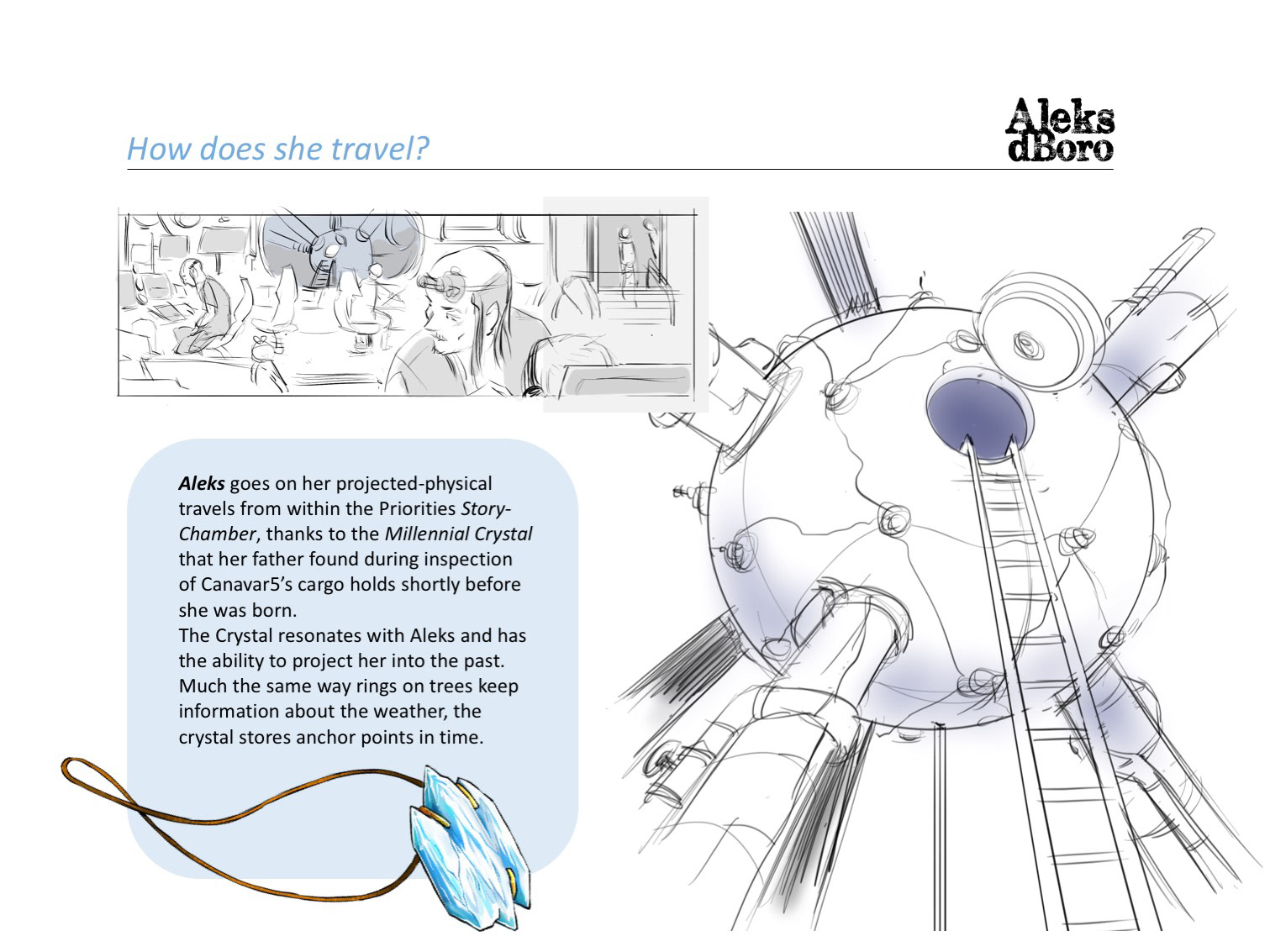 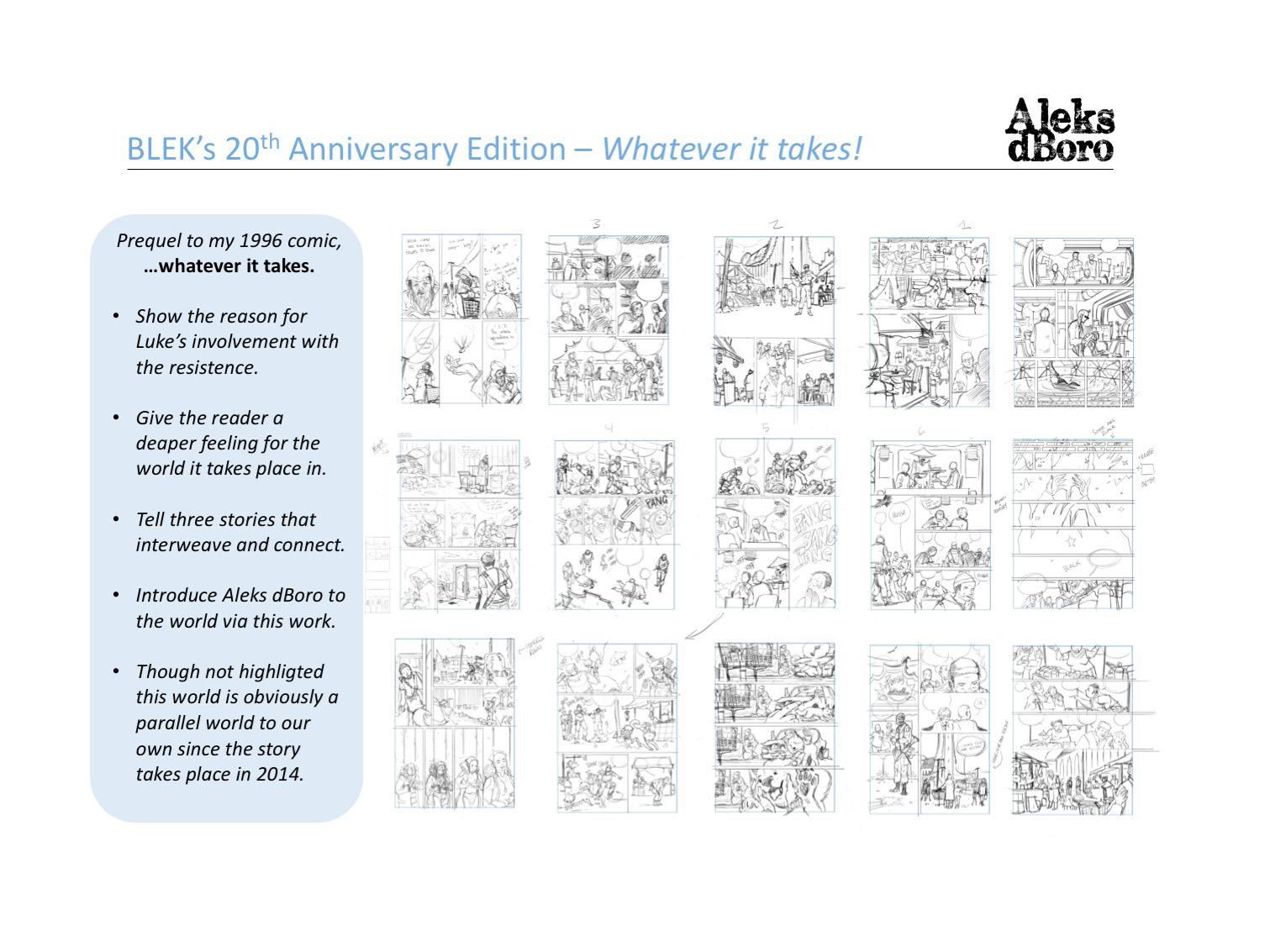 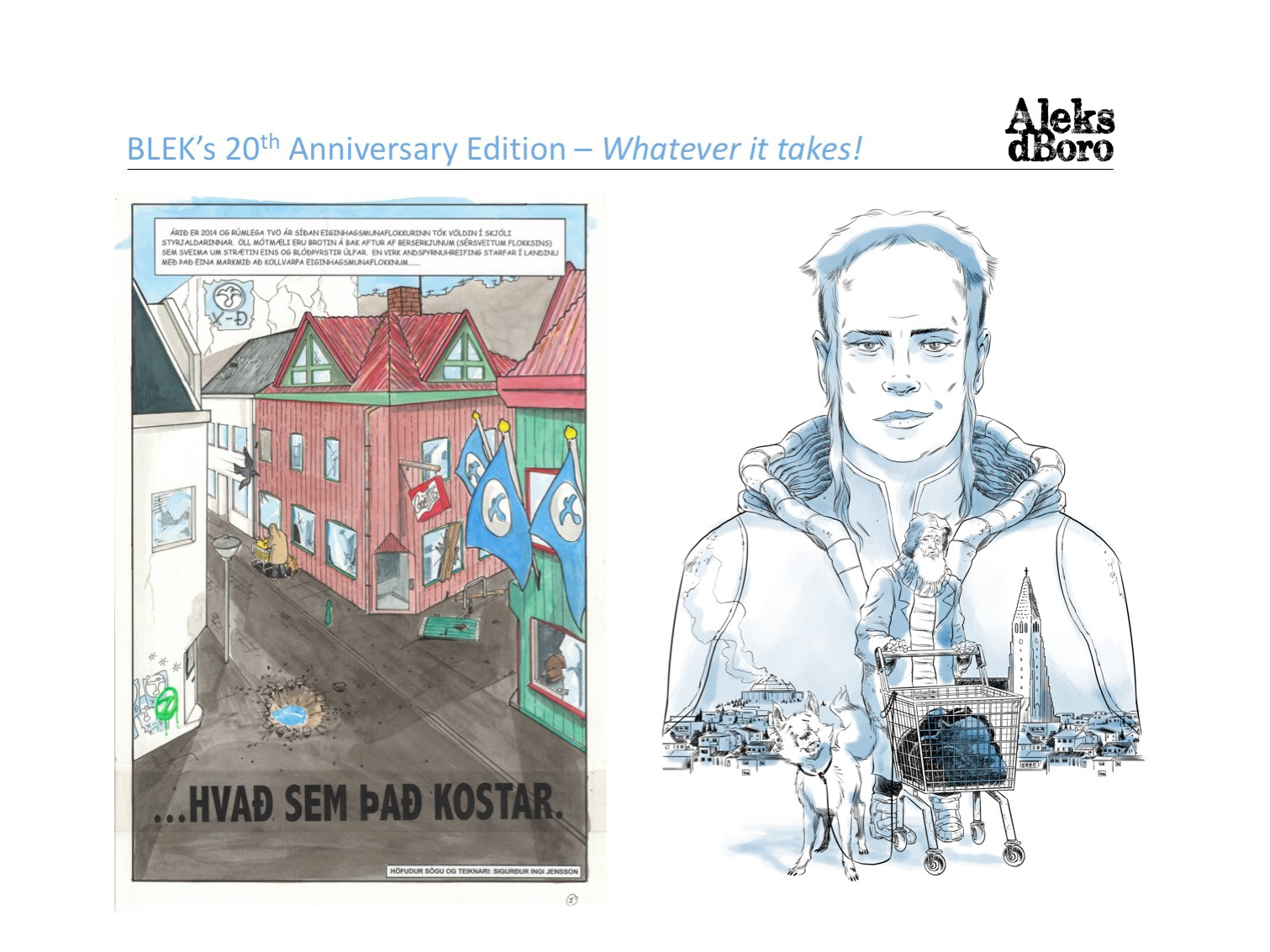 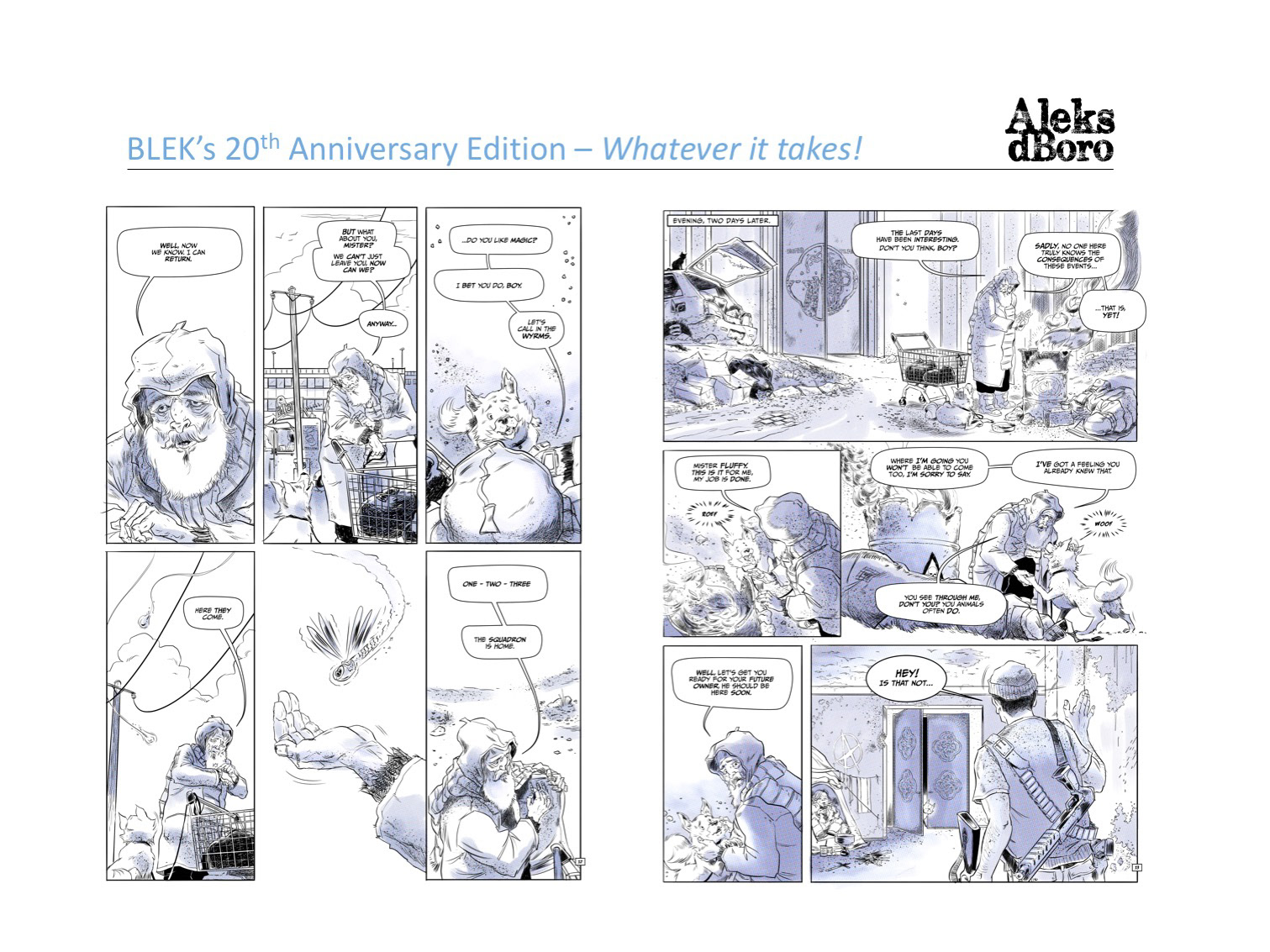 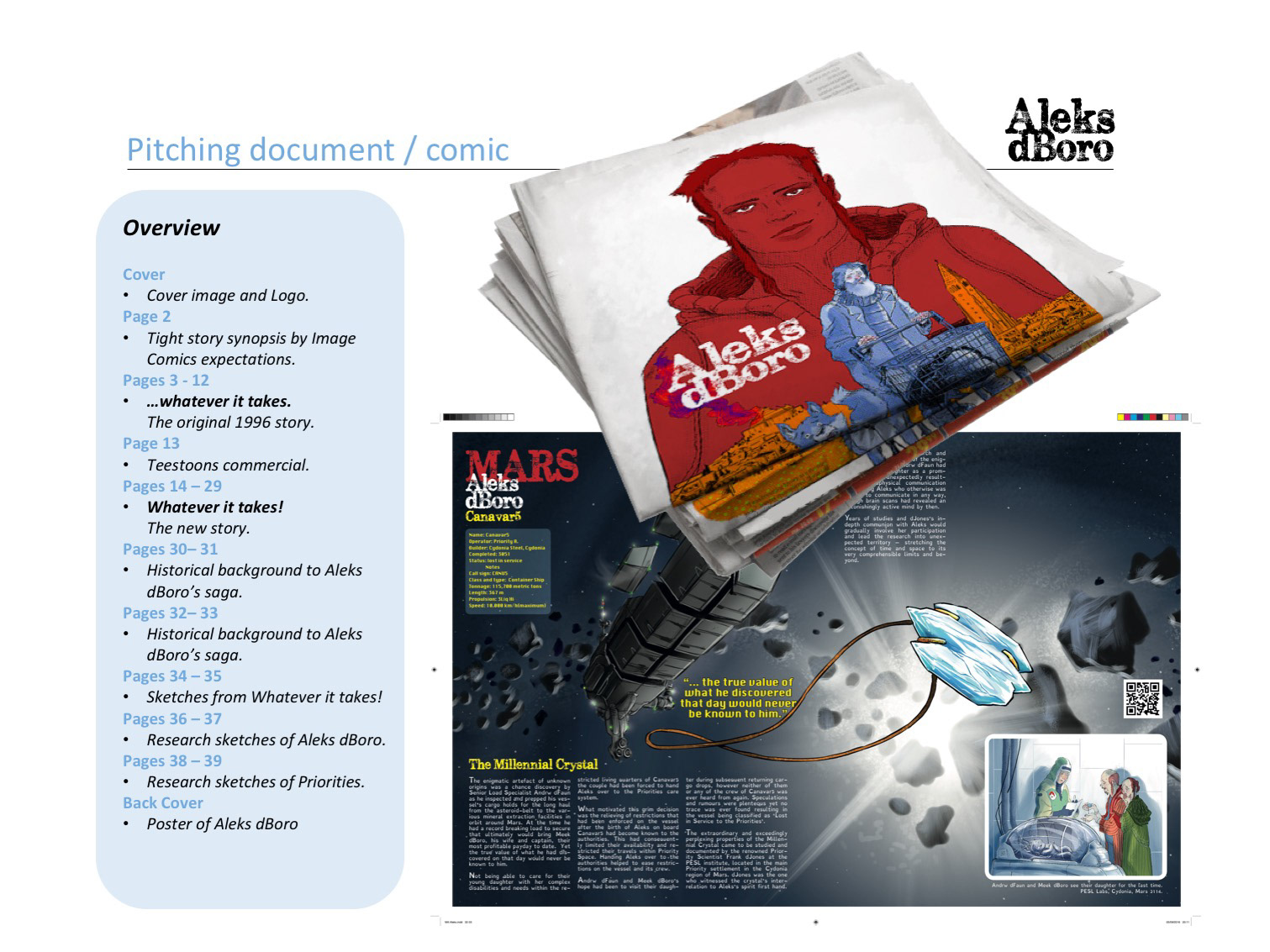 Examples of the creative process
I allowed the story to flow out in the sketching process, rather than write a script. I have found that this process is a much friendlier way for my creative character. In the end I would eventually move whole pages around, switch out frames and break up the linear narrative I first produced.
In late 2017 I read an article on Studio Ghibli's creative process and found it refreshing to read that the studio incorporates much the same approach. 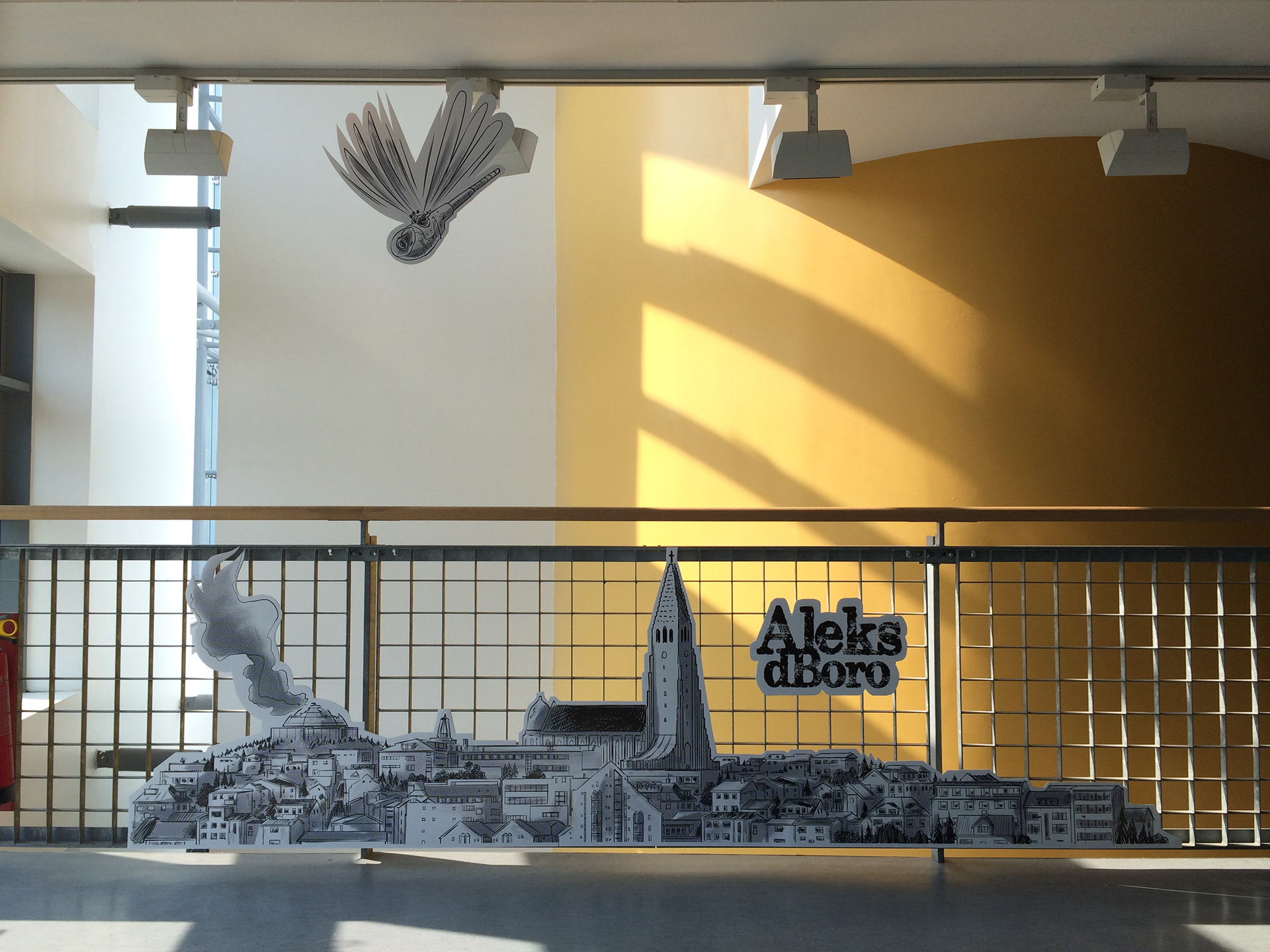 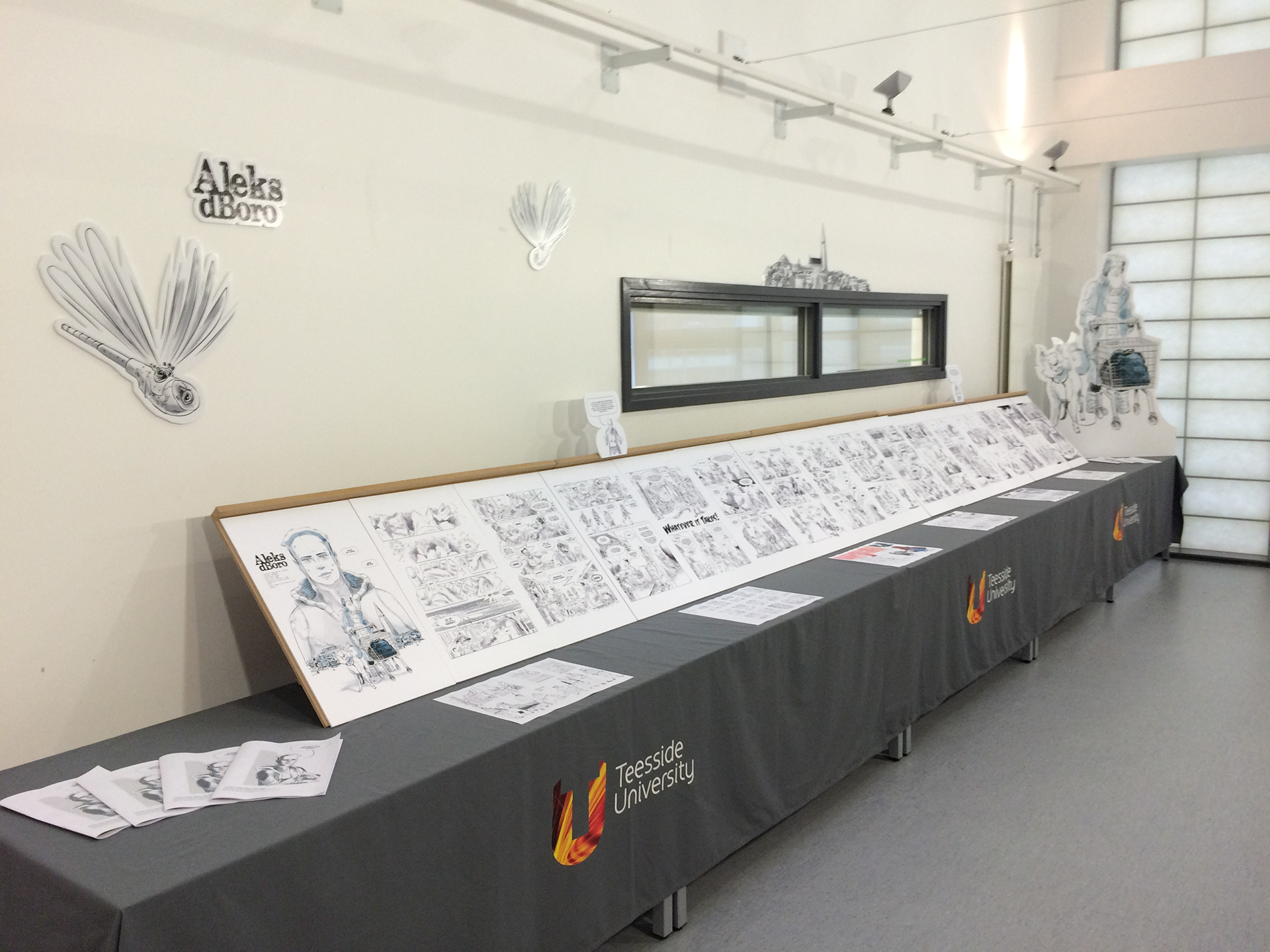 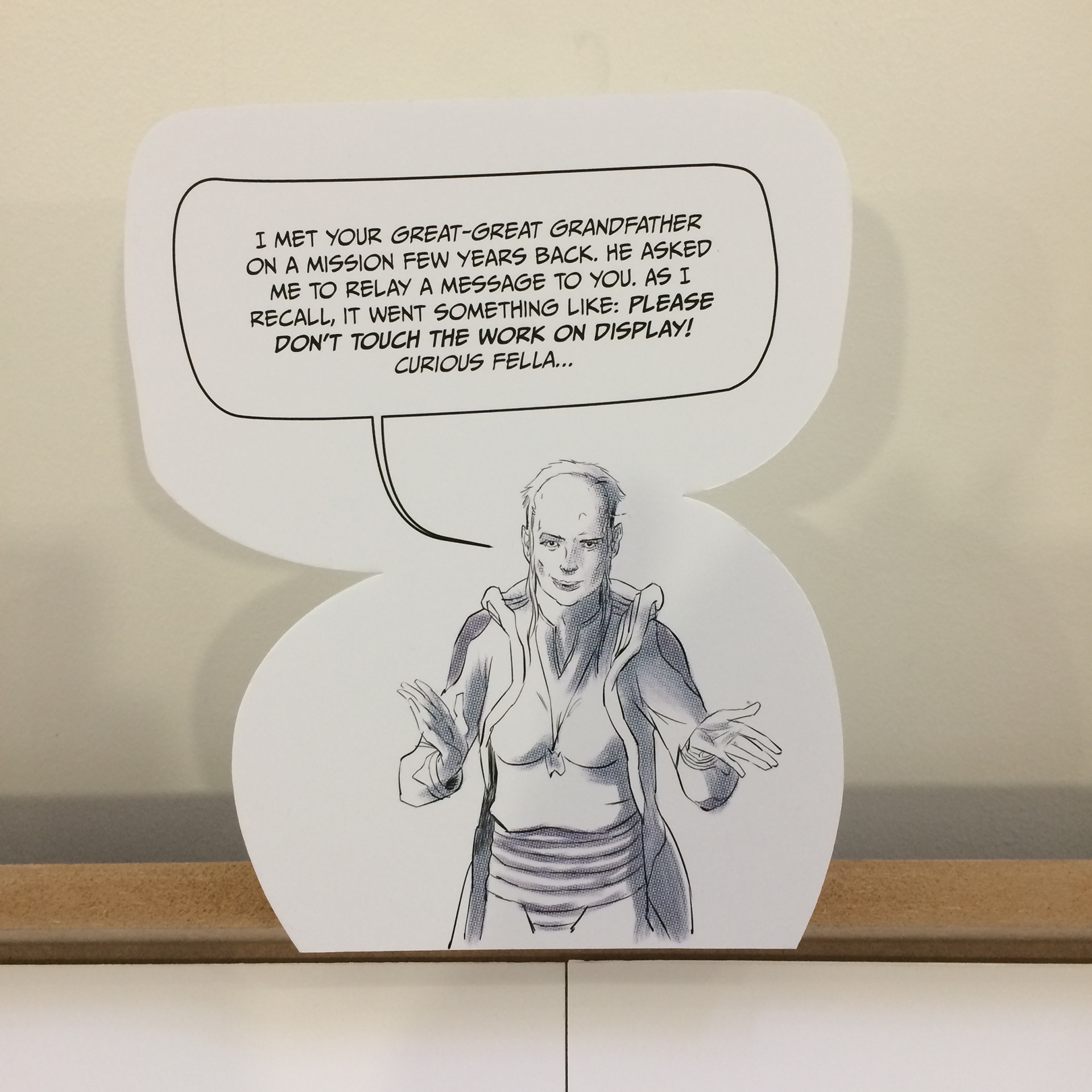 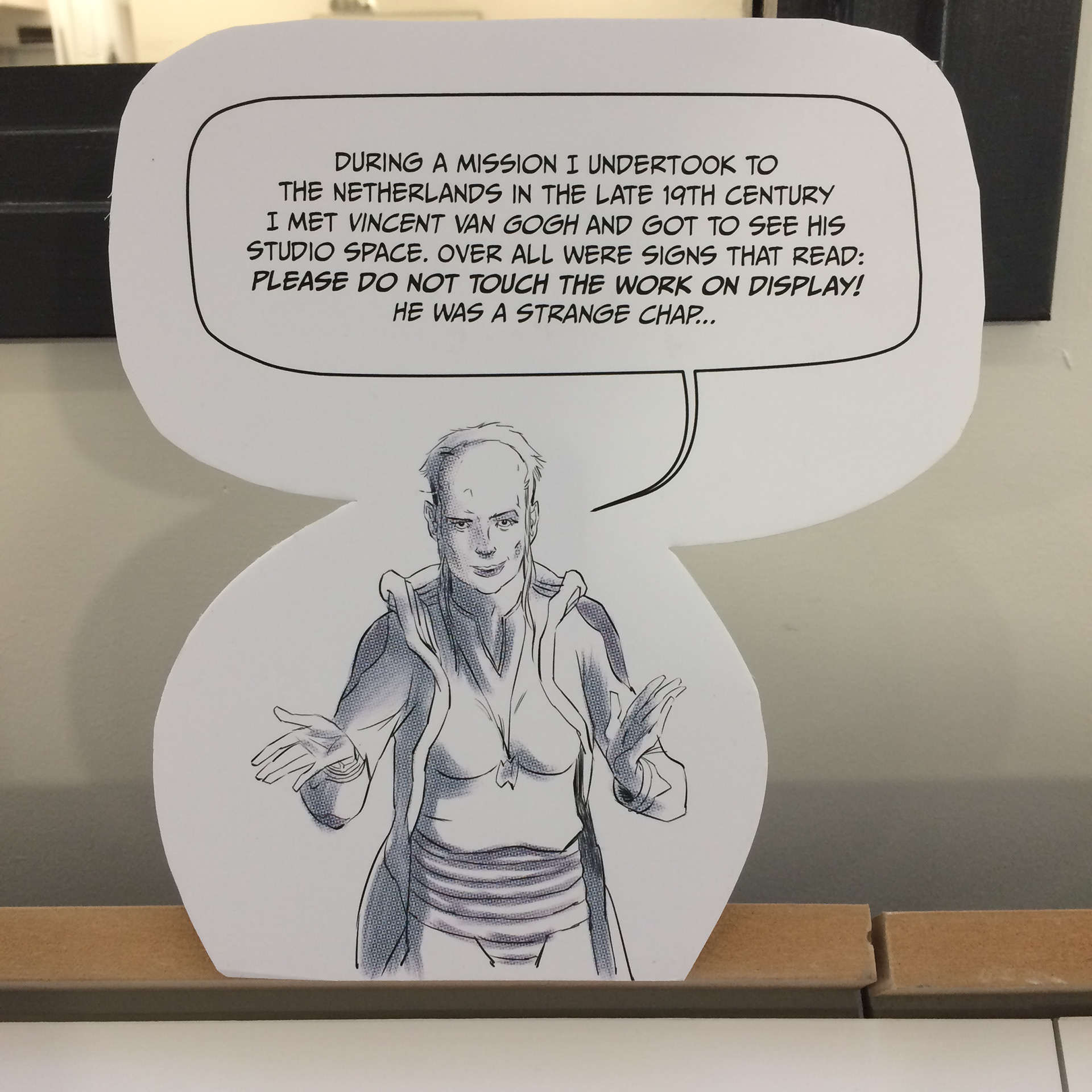 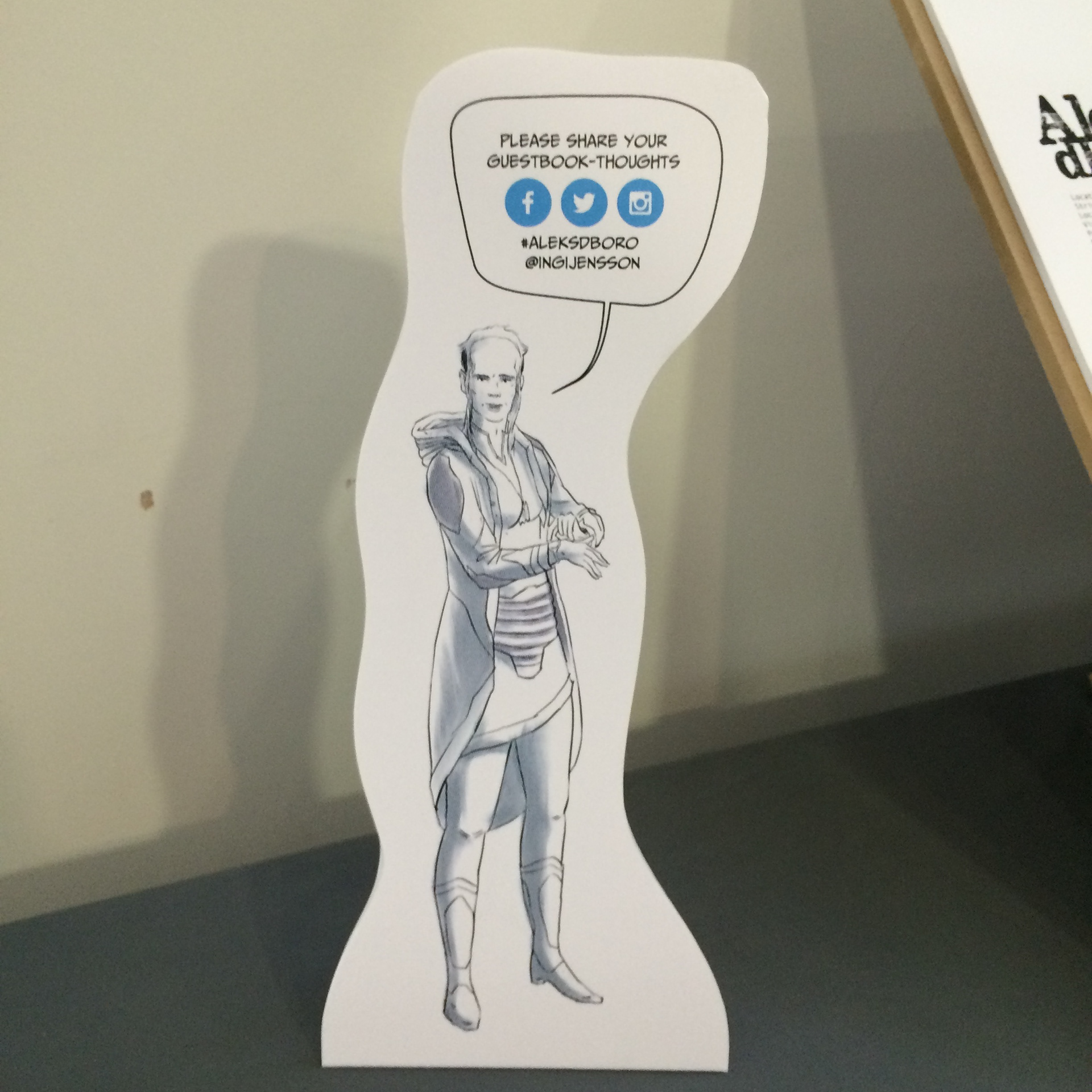 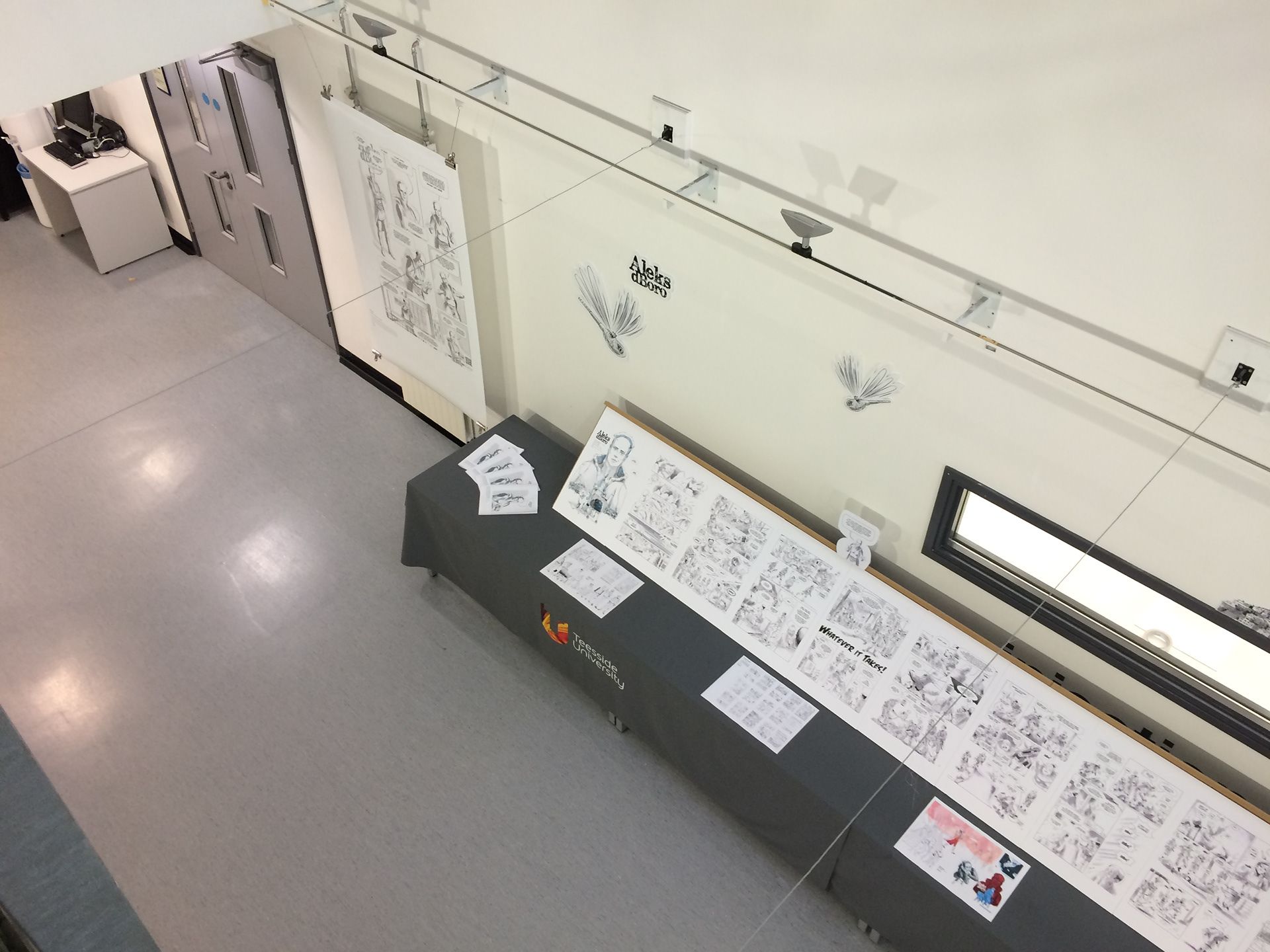 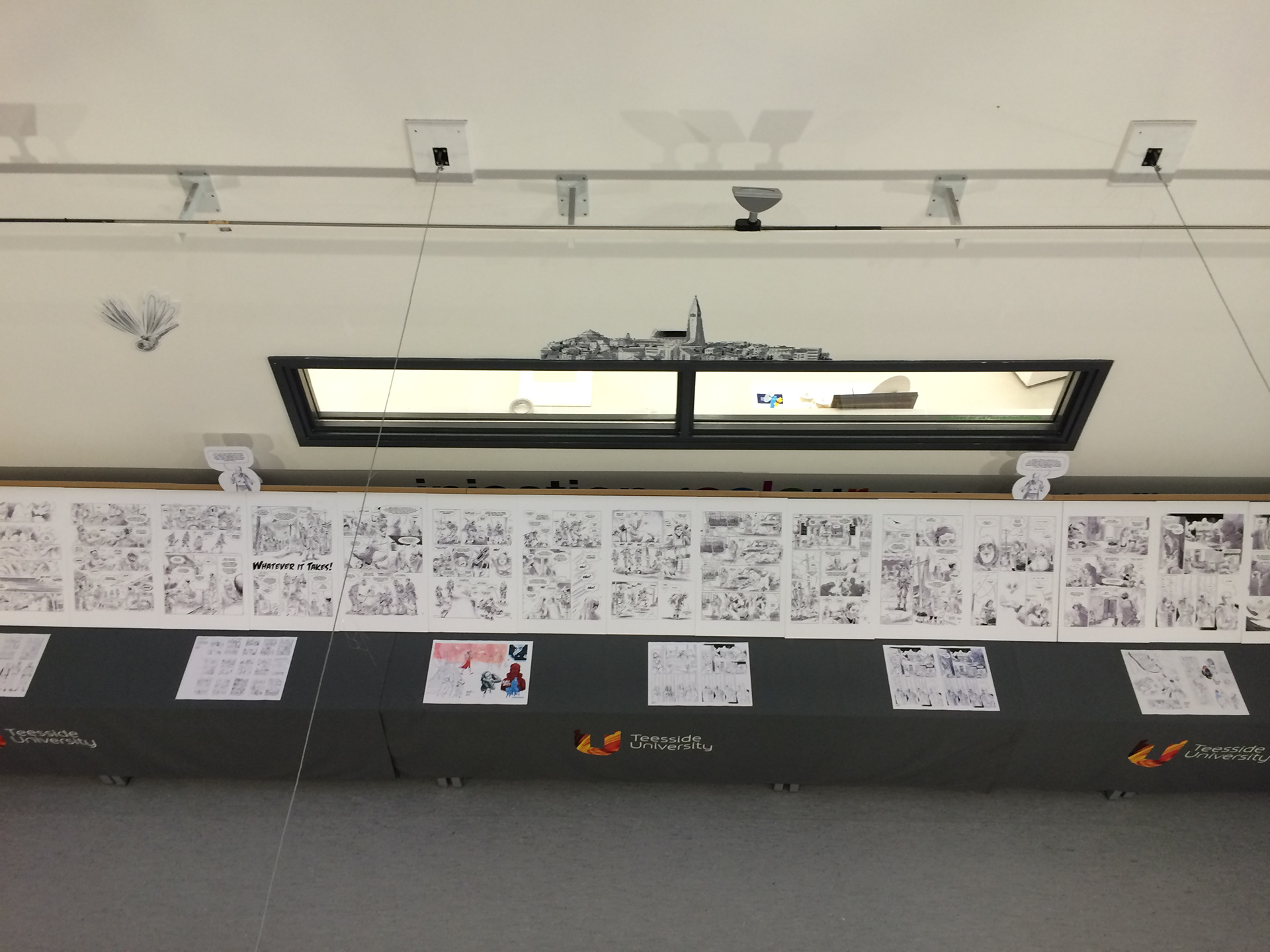 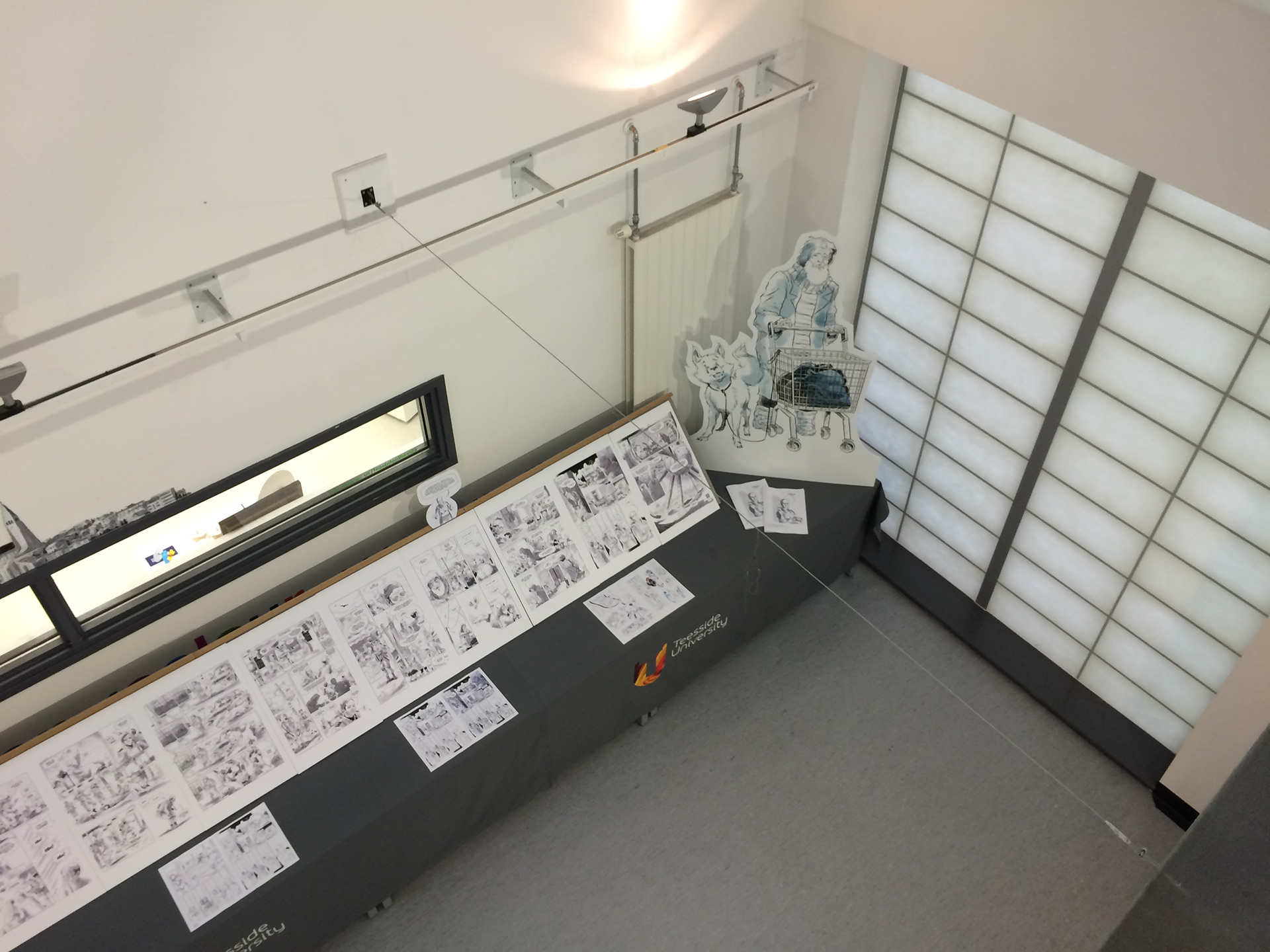